It is mandatory that when I make brain tumor jokes, comments, sarcasm, or just blurt out completely ridiculous things (such as telling our cute waiter that I have a brain tumor, you’re hot, what are you doing later – yeah, I’ve done that, ask my friend Jennifer) that you either LOL, LMOA, or ROFL.  Do not bother with the perplexed or sympathetic stares.  If I can laugh about this crap, so can you.  I’m the one with a brain tumor.

More will be revealed… 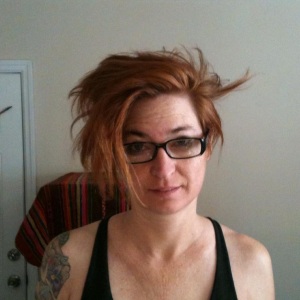 So, I’m not getting much sleep these days.  OK, that’s an old photo, but really captures how I feel.  I think Bob (the galaxy on my brain-stem) is a night owl. He pretty much talks to me all the time, but he’s louder in the quiet of the night. Jerk. I’m really trying to make friends, but he’s a bit of a bully.  I mean, it’s not like I invited him to move in!  My friend Mary said he must have been stalking me for awhile.  Now he doesn’t want to get evicted… but I’m calling in the big-boys. Time to slap a restraining order on that galaxy!

It’s interesting how much the body tells us that our mind tries to hide from our awareness. My upset stomach lets me know that I am experiencing a high level of anxiety, although my mind is telling me that it’s all going to be ok and not to worry. I’ve been riding the hell out of this emotional roller-coaster of WTF is going on.  Oh, hey everybody, I have a brain tumor!

I have fairly low-key freak-outs, with lots of random and sporadic “what the F**K”s flying out of my mouth.  My roommate has also held me through several snotty, loud, uncontrollable crying fits. You know, the really ugly loud sobbing kind of crying. Man it feels good letting go like that!

I was going to interject into this post something inspirational along the spiritual lines, followed with some witty tumor humor (I am full of that these days) but I’m flipping exhausted now.

First neurology appointment after my MRI reports tomorrow at 8:30am.  Maybe I’ll try to sleep… shut up, BOB!!!

Thanks for reading along… more will be revealed,

Meet Bob, the marble-sized galaxy in my head.  Specifically on the top of my brain-stem.  I’m not sure how long this galaxy has existed or from where it was manifested.  I believe that it is a friendly galaxy, of no threat to humanity on planet Earth.  I have no idea why Bob chose me to carry him in our world and am trying to come to terms with him occupying my brain-stem. His existence has been interfering with my muscle impulse control, which is quite disturbing and slightly destructive to my quality of life.  On the balance, his existence has given me a completely new outlook on life.  I’ll get more into that on another post.

Thank you for reading along.

More will constantly be revealed…

Um, what?? I just came out of my 2nd MRI appointment which I was referred to in order to get a better look at “something” using contrast dye.  Everyone one said not to worry, it won’t be anything.  That’s what we say. That’s what we all hope to hear. Then I read the report from the 1st MRI taken two days earlier, the one in which they saw “something” according to the neurologist’s receptionist who called to set up my second appointment. She also scheduled a follow up with my neurologist for the following Tuesday.

First off, the fact that I have a Neurologist is surreal enough.

I had begun having some involuntary muscle movements about a year ago.  My boyfriend started saying that I seemed really restless when we were relaxing on the couch.  I thought I was getting restless leg syndrome, and maybe I was.  Then my shoulders started twitching some, more noticeably while driving with my hands clenching the steering wheel. I started feeling the overwhelming need to stretch my arms, and to move my head around to stretch my neck. I disguised most of the involuntary movements as stretches and adjustments to not draw attention to myself.  I thought it was from stress or anxiety, or even psycho-somatic.  These sensations were getting progressively worse, causing a great deal of discomfort in my shoulders and neck, over the past six months.  My roommate also began noticing (and telling me) that my memory was getting worse.  My memory has never been great, so that was hard for me to notice.

I made an appointment with my psychiatrist to ask him if this could all be side-effects of the anti-depressant and/or mood stabilizer that I take.  After reviewing the nature of my movements, he suggested that I make it a priority to see a neurologist and request an MRI.  That alone freaked me out.  It’s what I expected to hear, but did not want to hear.

My primary care physician disagreed with my psychiatrist’s opinion, but agreed to refer me to a neurologist.  The neurologist suggested that I had a neurotransmitter imbalance and prescribed gabapentin to see if that would help.  He ordered an MRI at my request and told me that it was just to rule out any other cause, but that he was sure there would be nothing found.

A close friend emailed my MRI reports to a neurosurgeon with whom he is a personal friend.  He responded quite quickly, from a beach in Southern California where he was vacationing with his family.  I was told via my friend that the doctor said this is most likely an inoperable tumor as it is on the top of my brain-stem and that we will need to get a biopsy of the tissue. He asked that I schedule with his office for next week, following my neurology appointment.

I am in the waiting zone between knowing “something” is wrong and knowing what it is and what can be done.

And so, more will be revealed in this journey of discovery.