In the beginning of my journey into sobriety, I would want to drink for really big important reasons, like it happened to be Tuesday and I had managed to stay at work for the entire day; or I stubbed a toe. Going to the grocery store was a big trigger, the beer was in the same aisle as the bread.

I spent countless nights wondering how I would get married and not drink champagne, or go to someone else’s wedding and not drink alcohol.  I agonized over whether or not I would invite my actively drinking alcoholic father to my wedding. I was single during many of these sleepless nights, no fiance waiting in the wings.  My dad has since died, and I’m still not married, so I sorta just side-stepped that whole dilemma, at the same time proving to myself yet again that fear of future events is a waste of time.

Yet here I am, day after day, full of fear about the future.  Ever since reading that stupid MRI report 12 days ago, my mind has lived in a mansion of What-Ifs. Not all-day every-day, but at least a hundred times a day. I step into the fun-house and stare at my warped reflection in the distorted mirrors, i loose my balance on the spinning, tilting floors, and run from the mad, mad clowns.  Then I nap.  I nap for hours, drifting into a blissful state of non-thinking. Each time I awake, I am startled again by the remembering. I have a brain tumor.

This would not have even occurred to me as a possibility on the “What would you drink over” game.

When I went to my psychiatrist with my involuntary movement symptoms, and he suggested that I see a neurologist for an MRI, “and make it a high priority.” That, hearing that, stirred the desire to throw back some whiskey to blot out my fear.

However, the words, “You have a brain tumor.” Well, fuck drinking, I’ve got some serious shit to do! Like post more pictures of my dog on Facebook.

Thanks for reading along with me.  More will be revealed… 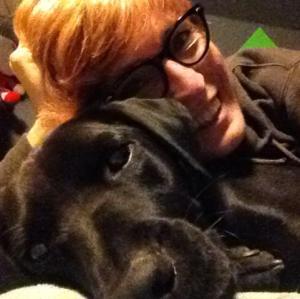